View the publication in pdf format

With the project Sideshow Kaufman, (2007) I tried to reassemble a phenomenon that in the stream of information adopted a very complicated structure. The piece traces the remains and the representations of Andy Kaufman, a mythologized american comedian who died in 1984. Kaufman’s legacy continues to transform and create endless representations of itself and produce a maze of truth and make believe.

Active during the 70ties and early 80ties for example in TV and stand-up, Kaufman was a playful, uncompromising and radical part of comedy. Lynne Margulies was Kaufman’s girlfriend the last two years of his life and even though they were never married she is often referred to as his “widow”.

With products, events and movies etc, she continues to work with Andy Kaufman’s legacy and so does many others. During the first years of the 21st Century Lynne planned an event which took it’s aesthetics from the American sideshow circus. The event was never realized but priot to that Lynne made a poster for the circus. It was a montage picturing a bannerline, which in the sideshow circus was a row of painted canvases mounted on a stand. The bannerline functioned as an entrance but also as a display of the different acts you could find inside the tent. Lynne also made twelve sketches for the bannerline and some of these were pasted into the montage.
In the twelve different sketches she comment on herself, Andy and the myths that surround Andy’s career mixed in with classic sideshow motifs.

In a collaboration with Lynne Margulies, I compiled the twelwe images that was made for the event and recreated the presentation that Lynne outlined in the montage. The piece also consists of a text that gathers a number of different examples of how Andy Kaufman’s identity is managed and formed in the representations created by friends, Hollywood, fans and his family. 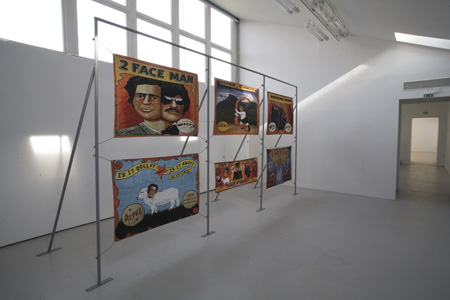 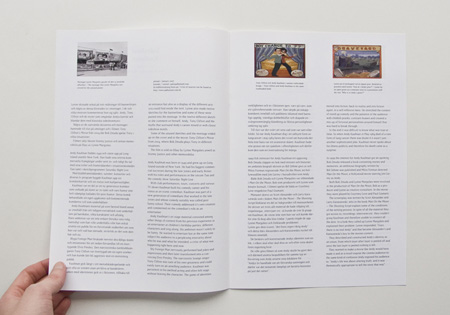